The North East is easily overlooked as a holiday destination, but the Northumberland coast has been classed as an Area of Outstanding Natural Beauty, the beaches are huge, and there are wonderful remnants from the past to fire your imagination. 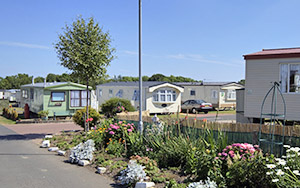 Parkdean Resorts' North East parks are located close to wonderful beaches. The most northerly is Cresswell Towers, a smaller park in Druridge Bay that sits at the end of a six-mile stretch of sweeping sands. Sandy Bay is a cliff-top park with sea views and its own Koi Carp ornamental lake. Church Point sits on the scenic headland Newbiggin-by-the-Sea, with beautiful views across the bay and fabulous coastal walks. 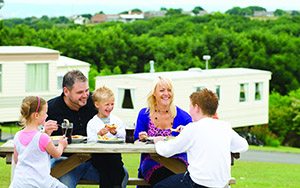 For more southerly options, there's Whitley Bay holiday park, which is close to lively Newcastle and Gateshead ...both are perfect for day-trip visits..., yet within easy reach of miles of sandy beaches. Further south still is Crimdon Dene, on Durham's Heritage coast. There's a beach nearby and sand dunes that make a brilliant play place for children. 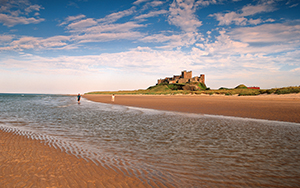 Regularly named the best beach in Britain, Bamburgh Beach has miles of golden sands overlooked by Bamburgh Castle. Other favourites include the dramatic beaches at the fishing village of Seahouses, the sandy expanse at Berwick-upon-Tweed, and the north and south beaches at Druridge Bay. 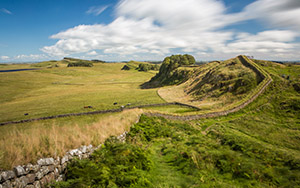 Northumberland was once the northern edge of the mighty Roman Empire - a boundary marked by Hadrian's Wall, which was built to keep the marauding Scots out. The remains of the wall are now a World Heritage Site that includes Roman forts, archaeological sites and plenty of pubs providing respite for weary travellers. 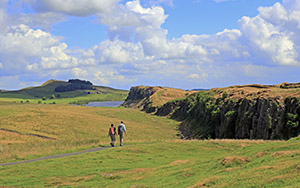 A large part of Northumberland has been given National Park status, with miles of footpaths winding their way through the valleys, over hills and alongside crystal clear rivers. With just 2,000 people living within the park it really is possible to feel like you are the only person exploring the wonderful wilderness.

The Holy Island of Lindisfarne, off the coast of Northumberland and only reachable at low tide, was the centre of Christianity during Anglo-Saxon times. Visitors can see the remains of the 12th century priory church and visit the museum to find out more about the ancient monks, the cult of St Cuthbert and the violent Viking raid that devastated the community.